Méribel can satisfy everyone; but it's intermediates and advanced who are spoilt for choice on the many long runs, on mostly south-facing, tree-lined slopes - which have made Méribel it a favourite amongst British skiers for over 50 years.

For beginners long, gentle green runs at the altiport above Méribel and a smaller area at Mottaret + "The Trout" green, which links both centres, are ideal.
There's almost limitless choice for intermediates on long blue and red runs descending into Mottaret and Méribel. The longest and toughest red runs are from La Saulire, Mont Vallon and the ridge between the valleys of Méribel and Val Thorens, descending to Mottaret.
For experts the greatest challenges are above Mottaret, on the descents from Mont de La Challe, Mont Vallon & La Tougnette - with big moguls on other runs a great test of technique and fitness.

The 17 acre Mottaret Snow Park, and the Méribel Moon Park offer a great range of dedicated slopes and obstacles for beginner and experienced boarders.

20 miles of scenic forest trails, linked to Courchevel, are reserved for X-country.

As a ski resort , Méribel's origins started with the British in the 1930's. Over the years it's lost none of its original appeal and now has apres-ski activities and nightlife to match the attraction of the slopes.

The mix of British and anglophile French visitors is reflected in the range of pub-style apres-ski bars and quieter piano bars, restaurants ranging from cheap & cheerful pizza & pasta, through rustic Savoyard, to gourmet French cuisine. 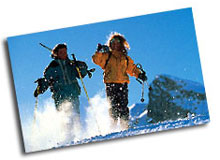 At the centre of the immense 3 Valleys, Méribel is the perfect destination for intermediate and advanced skiers and boarders who want to clock up huge distances on more than 600km of well-prepared runs, served by a highly efficient lift system - with excellent ski-in ski-out convenience.

The picturesque chalets and hotels of Méribel hug the slopes from the centre to the upper parts of the village at 1600 meters. Higher still, Méribel at 1700 metres gives speedy access to the neighbouring valleys of Courchevel and Val Thorens/Les Menuires. 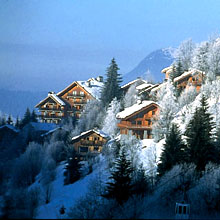