With an attractive mix of skiing and boarding, above and below the tree-line, it's easy to see why the Gastein Valley has increasingly begun catch the attention of British visitors, during a winter season which starts early December and lasts until the end of April.

The slopes have a majority of wide red and blue runs, which make it particularly suited to intermediate skiers; with some fantastic long descents of up to 8km possible in the Schlossalm and Stubnerkogel areas, easily accessible from the villages of Bad Hofgastein and
Bad Gastein.

The Dorfgastein/Grossarl sector has the additional facility of a board park.

Cross-Country skiing enthusiasts are also well-served, by an network 70km of marked trails spread throughout the valley.

The Gastein Valley is good for mixed ability groups and families, and for anyone who won't be boarding or skiing.

What better way could there be to end the day, and start the night, than luxuriating in one of the two amazing thermal spas
in Bad Gastein & Bad Hofgastein?
Sauna, steam, hydrotherapy and massage are sure to relieve any tired muscles and rejuvenate you for the evening ahead!

Both villages have numerous bars; from quiet late-night drinking spots to crowded, lively bars, plus plenty of restaurants and discotheques, and live music performances can be found almost every night of the season.

Bad Gastein also has a casino - and if you're not the gambling type, we're told it serves excellent cocktails. 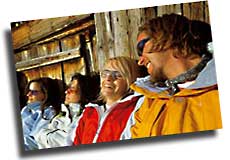 Ski or spa? Spa or snowboard? Only in the Gastein Valley might you consider it a real choice, and be able to enjoy both - 200km of snow-sure slopes and two of Europe's most modern, genuine thermal spas, just one hour from Salzburg.

The Gastein Valley's reputation as a spa destination is equalled by its popularity for winter sports, due to an extensive network of modern lifts, high altitude and a very good snow record. Easy access, make it an ideal destination for a short breaks, and staying longer offers the chance to explore a further 600km of runs covered on the Ski Amadé lift pass.
Lunch on the mountain is worth taking time to enjoy in one of many cosy, atmospheric huts, amidst the beautiful mountain scenery, and after a day on the slopes skiing or boardin, and a hearty lunch, a visit to the Alpen or Felsen thermal spas is a must!