The world-renowned runs on the Parsenn lie directly above Davos and, being linked to Klosters, this the ideal starting point for advanced and intermediates, with a big variety of long runs. One of the longest  is the 12km descent from Weissfluhgipfel to Küblis, with a vertical drop of over 2000 metres.

For a change of scenery and pace there are 3 more areas,  Jakobshorn, Pischa and Rinerhorn. Rinerhorm and Jakobshorn are good for beginners and intermediates and Pischa is perfect for freeride, with many ungroomed slopes.

For boarders Davos is exceptional, with boardercross on Parsenn, fun parks on Pischa and Rhinerhorn, but Jacobshorn stands out - with 2 monster half pipes (one floodlit), kicker and rails, plus the Jatzhuette bar/restaurant which is party central all day, and nights at weekends.

Skating, curling, ice hockey, indoor and outdoor heated pools and sleigh rides are some of the après-ski activities on offer, in addition to relaxing spa therapies.

Davos is a big resort with a lot to offer and anyone who says Davos is quiet at night - really hasn't looked!

As the lifts are closing the night-life starts, at outdoor bars in town and at the Bolgen Plaza at the foot of Jacobshorn. 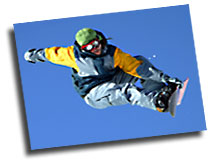 At height of almost 1600 metres, Davos is a large cosmopolitan ski town, with a good snow record, a long season starting in early December and one of the largest ski areas in Switzerland - and easily accessible from Zurich airport.

Davos and Klosters are linked and have a common lift pass covering 305km of marked slopes, with many long runs and plenty of variety for all levels of boarders and skiers. Davos is a modern town, with a more urban style of building than a typical Swiss resort, but the surrounding mountains are traditionally, and dramatically, beautiful. There's good off-piste to explore with a guide and the Jakobshorn is excellent for boarders. Varied slopes, winter footpaths, sledging, skating, curling, art galleries, museums and good shops make Davos a great choice for mixed ability groups and non-skiers or non-boarders.